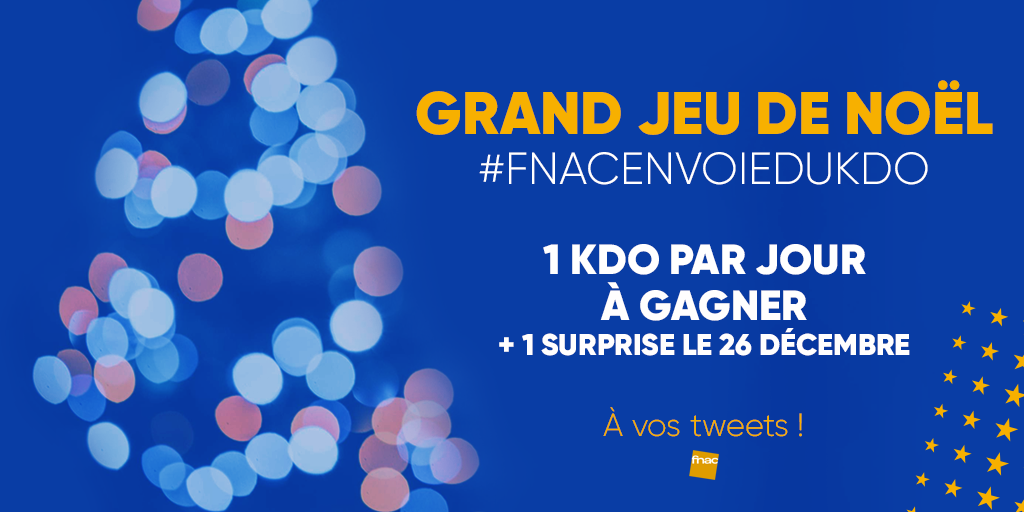 Every year, the renowned french company Fnac (which sells cultural and high-tech products worldwide) generously reward its community for Christmas by offering one gift everyday for a month, through a game contest.

Since mid-2017, Fnac uses the Like a Bird platform to manage its recurring operations. Therefore, they chose to work on the same platform to organize their huge Christmas operation.

Inspired from an Advent calendar, the group offered one gift a day from the 1st to the 23rd December included, as well as a surprise on December 26th. One winner was chose everyday and the big winner of the surprise would win the totality of the gifts that had been proposed through the entire month (which value represented more than €20,000)

GAME CONTEST: Today is the big day! Have a chance of winning our #JackpotFnac, equivalent to more a value of more than €20,000 of gifts. Who will be the lucky winner? To participate, follow @Fnac and answer this tweet with #FnacEnvoieDuKdo. Good luck

Give more visibility to the operation’s hashtag #FnacEnvoieDuKdo

To this end, the social media team chose to set up a Tweet Draw. By asking its community to tweet #FnacEnvoieDuKdo while mentioning the account @Fnac, the company offered a huge visibility to its hashtag.

GAME CONTEST: Do you need a new computer? Try to win a #PC @HP Spectre Laptop. To participate, follow @Fnac and answer this tweet with the hashtag #FnacEnvoieDuKdo.

A management of 23 game contests, including 23 random draws, made easier with Like a Bird

Therefore, Fnac was able to configure 25 random draws upstream while having an overall and clear vision of its Christmas operation, thanks to the detailed statistics data provided for each random draw.

“The perfect tool to set up a game contest with a few clicks and to engage your communities!

All of our Twitter game contests are managed on the platform, we can create an operation with a few clicks! Like a Bird is really easy to use, in 5 minutes we can select the mechanism we want (RT, follow, Instant-Win…) that will allow us to engage our community at most and to recruit new followers!

Another very important thing: the after-sales service is ensured! The team is available and very reactive to answer our questions.”

Sébastien had configured 23 Tweet Draw operations upstream and only had to set the daily random draws. He chose to activate the Mandatory Follow option throughout the duration of the operation, which allowed him to get more than 3,200 new followers!

23 operations configured in less than an hour, and 15 minutes of daily management resulted in: