Diesel Parfums wanted to create an engaging operation to announce the release of their new parfume « Loverdose RedKiss ».

Their communication agency decided to use a Twitter Poll Card, and to set up an « auto-reply » bot on top of this card.

A winner was drawn at the end of the operation, that win the perfume of his/her choice.

Depending on participants’ choice on the poll card (4 different choices), @DieselParfums replied automatically, and suggested an action to be made or asked a question to the participants.

How did it work ?

Participants can vote with one of these four choices on the Twitter poll card : 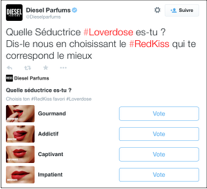 Bot will answer automatically with a configured answer. For each tweet, mechanic has many answers to reduce its « bot effect » :

Main benefit of the operation

To reduce the « bot effect », three answers by tweet can be picked (12 answers possibilities).

The amazing Like a Bird features which helped this operation to be a success :