Air France wanted to promote the town of Glasgow through an engaging campaign on their Twitter account @AirFranceFr.

To do so, the team from Social Media chose to create a quiz on Twitter with 5 steps. Each step would ask questions linked to Glasgow to allow the participants to collect clues to solve the final enigma.

The operation lasted one week, which gave the participants the opportunity to play for multiple days instead of having to finish the game in one day. A random draw was made at the end of the campaign. The winner received 2 Air France plane tickets for Glasgow.

A Like a Bird mecanism adapted to the needs of the customer : a tailor-made quiz on Twitter

To simplify the participation, a Conversational Card has been used for the announcement tweet. Therefore, to participate, the twitto only had to click on the button #LetsGoToGlasgow to start the game. 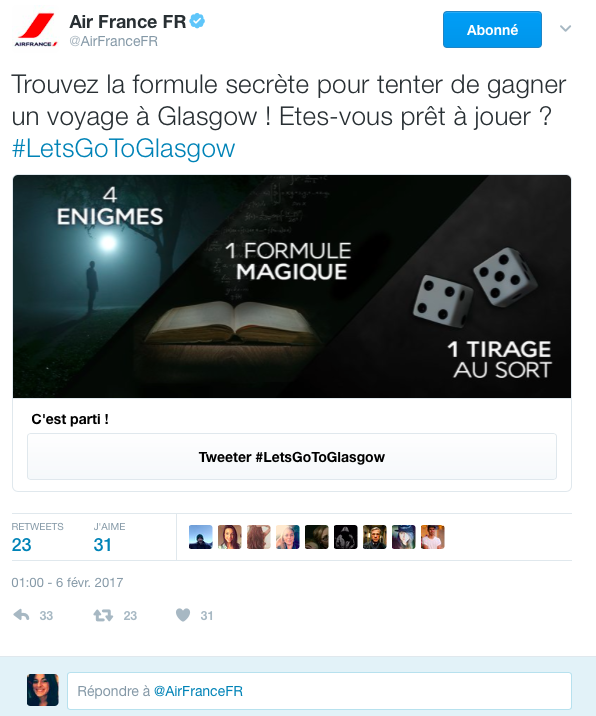 Find the secret formula to have a chance to win a trip to Glasgow! Are you ready to play?

Once the participant clicked on the button and sent the preconfigured tweet, he/she received the first enigma.

[Enigma n°1] Guess, using the clue, which famous physicist have taught in this university. Tweet his last name in a # to @AirFranceFR

If the participant got the right answer, he went to the next step, otherwise he/she would receive an error tweet.

[Enigma n°2] Where are we now? The answer is hidden in the picture! Find the #and tweet as an answer to @AirFranceFR

Here is the error tweet sent to the participants that gave the wrong answer :

Oh, it is not the right answer, try again!

Two questions had been asked for the third enigma to allow participants to get another chance to win.

Each of the two questions proposed 4 answers. To make the user experience even more “friendly”, this step was configured with a Conversational Card. The twitto only had to click on one of the card’s buttons to tweet. 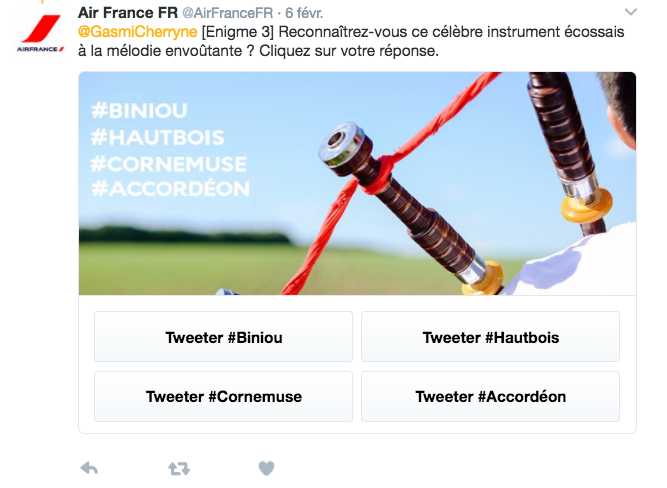 If the tweep gave the wrong answer, he would receive an error message and then, the second wording. 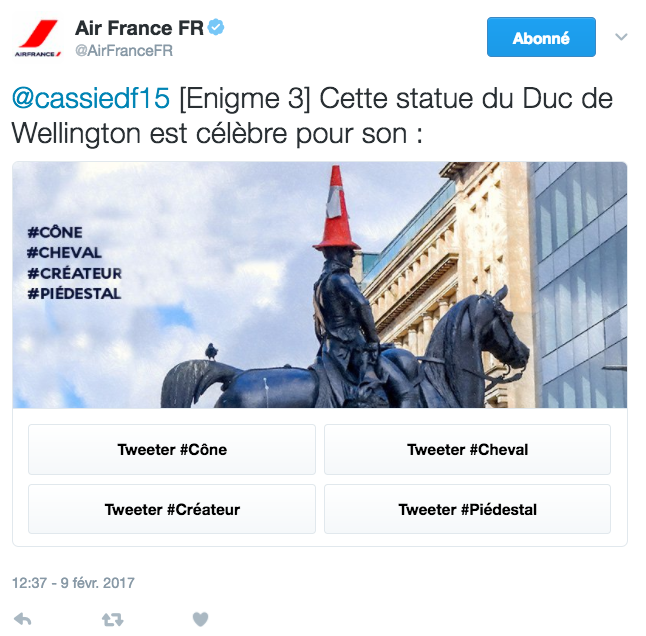 At this stage, if the participant gave a wrong answer again, the bot would stop answering and would only reactivate when it would detect the right answer to the last question it asked.

And so on until the final step of the game.

The random draw was made by Air France on the platform. Like a Bird gave to Air France the list of participants that ended the game, followed by a list of the best participants.

What made the success of this quiz on Twitter

« At the end of 2016, Air France decided to launch a marketing operation with a bot. The idea was to propose a game to give more visibility to Glasgow. Therefore, we contacted Like a Bird, recommended by Twitter, to assist us with this project.

After a meeting with them, we were able to study their offer. Like a Bird convinced us with their proposal. Once the process was established, we have been helped by the Like a Bird teams at each step of the project.

We are very satified by this collaboration, they have been highly reactive, available and gave us proper advices. »